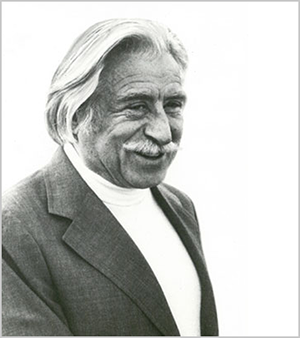 Samuel Rubin was born near Bialystok, Poland in 1901 and emigrated with his family to the United States to escape anti-Semitism and poverty. His parents opened a small dry goods store in Ozone Park, Queens, NY where he worked after school. Sam needed few lessons in the meaning of poverty, discrimination, and the abrogation of human rights. To further his vision of a world dedicated to peace and justice, Sam incorporated the Samuel Rubin Foundation in 1949 with proceeds from the company he founded, Fabergé Perfumes.

He was passionate about education and health care, understood the clear connection between domestic and international problems and opportunities, and was offended by what he termed “plunder and hunger” unnecessarily visited on the world’s peoples. Sam believed in the importance of addressing the root causes of inequality and oppression, funding a variety of approaches in his beloved city of New York, across the United States and around the world, approaches which often were ahead of their time.

In keeping with his beliefs that there could be no peace in the Middle East without social and cultural interaction across religions and ethnicities, Sam founded music academies and conservatories in Israel in the 1950s, and insisted they enroll both Jewish and Arab students.

Today, the Samuel Rubin Foundation continues the legacy of its extraordinary founder. Recognizing that there is no single way to achieve meaningful social change, the Foundation’s modest grants support activities by civil society that further its mission to create a just and peaceful world for all.